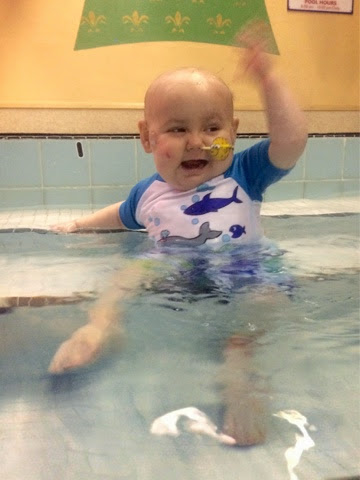 Before his diagnosis 15 months ago, Dominic loved to swim. We'd throw him underwater between us, float him on his back, and by the time he was nine months old he was able to stay above the surface with water wings all on his own.

With a broviac line coming out from his neck artery, even baths became tricky. We'd use plastic wrap and waterproof tape but that won't work in a public pool.

And, of course, a public pool is an easy way to get sick if you have no immune system.

Tonight, at our hotel in Vancouver, he swam again. Using what is essentially a gigantic clear sticker, we covered the entire site of his line. Apparently they use it for kids getting water therapy; something Dom never qualified for during his 15 months in hospital.

The swim came at the end of the day. It was so wonderful, we didn't want it to end.

We hope we'll feel the same way about this trip once it's over.

The rest of the day was more difficult than expected. Our first trip to the B.C. Children's Hospital included numerous problems; we were at first put in a room that doubles as a storage closet due to overcrowding on the cancer ward. Then the type of platelets he was supposed to get were still in Alberta — the staff in Vancouver were under the impression Trish and I were to bring his platelets with him. On the plane. Seriously.

Instead of a two-hour stay to get blood tested and platelets transfused, we wound up there for six hours. Everyone there was kind to us and we are all hopeful tomorrow will be better, but the fact remains that it shouldn't be this difficult.

Thanks to a nice dinner at the highly rated Cactus Club Coal Harbour — where Iron Chef winner Rob Feenie has designed the menu — we started to forget about the rest of the day. The swim reminded us why we're really here. If every day could be like this, that would be just fine.