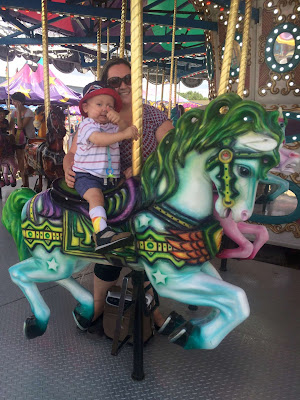 And his body has gotten sick of them, building up antibodies that make each transfusion a bit less effective than the last.

First he got standard platelets. Then specially irradiated ones. Then ones that were specially matched to him, from specific donors who had to be arranged to come in and give at predetermined times. All so that a little boy could go on living.

Even with all of that, his body now plows through the matched platelets so quick he needs a transfusion every two days. Given he's only awake for seven or eight hours a day as is, the result is extremely limiting on us all - donor, hospital, family and Dominic.

And that's where our doctors have come up with an idea they hope will reduce the number of visits he makes to the hospital.

There's a drug called bortezomib (marketed as Velcade) that they think could reduce the antibodies in his blood. No guarantees and it is a chemotherapy - and a very expensive one at that. The hospital has to apply for special funding just to give it.

Interestingly, one of the studies he was in at the start of treatment in 2013 was for bortezomib - but he wasn't selected to get it. So there is an off-chance it could help his leukemia, though that's not the reason he's getting it.

He'll have to stay in Calgary for two weeks for it. But he won't be admitted to the hospital. This time, he's going to stay at the Rotary Flames House and then come to the hospital's clinic almost every day for the chemo.

We visited there back in January but haven't stayed. It's meant for respite and end-of-life care, and Trish and I had always thought it might be where Dom spends his final days. Regardless of how things progress, now's a good time to see how it is.

For the record things have been a bit off this week. He's been throwing up more than usual and pretty tired and grumpy in general, though we did get him out to the Medicine Hat Stampede Saturday. But the pneumonia hasn't resurfaced and he hasn't had any fevers. There's reason to get up every morning.

And there's more going on this week than a special drug and a stay at Flames House. He wasn't supposed to make it this long. In December we were given weeks. So the decision to even approve this expensive drug for a terminally ill cancer patient suggests health care staff are taking notice. He'll have an MRI this week to see where his brain tumour situation is at, for instance. The leukemia was supposed to kill him long before his brain became overwhelmed.

One doctor whose research has led to a drug that in theory targets the kind of cancer Dominic has is especially excited. His drug is still in the testing phase but Dom is also going to have a bone marrow biopsy this week, some of which will be given to this doctor to test the drug on.

If the drug works on it... Well, we'll cross that bridge if we get there. Stranger things have happened. 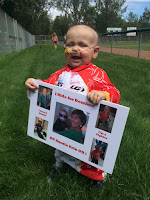 My sister Erin and Team Total Dom-ination did amazing in their Tour for Kids cycling fundraiser last weekend. As of now they've raised $24,675 for Kids Cancer Care Alberta and Camp Kindle.

She even did a speech on the second morning about Dom. Her main message? Don't live in fear; live in love. Dom was able to FaceTime with her at the finish and even broke out the cycling jersey he was given from the national riders last year.

As always, we're in awe of what Erin continues to do.

Our friend Corrie Dale is doing a charity bike ride too, only this one is geared at research and will happen Aug. 8 and 9. The Enbridge Ride to Conquer Cancer supports the Alberta Cancer Foundation and she's closing in on a $5,000 goal - though she and husband David have raised far more than that (he did the ride last year).

The Medicine Hat News did a story on Corrie, who talked a lot about Dominic. We're so proud to call her a friend.

Sorry for so much in one post. I guess it's been a busier week than it felt.