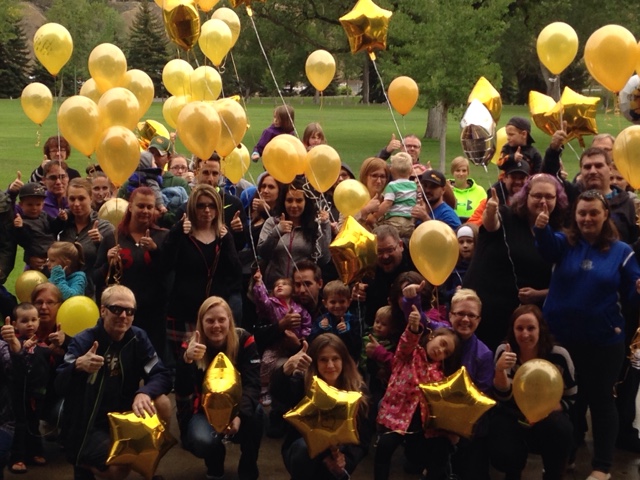 Earlier this year when posting on Twitter about Dominic's journey, I realized a hashtag could be useful to help amalgamate any fundraising attached to his story.

I tried #domstrong - nope, there's some reality cooking show competitor getting love there. How about #strongfordom? Used recently for another cancer story.

I went through a few before settling on #dominicstrong - which had seen no activity in more than a year.

Little did I realize what would happen with it once my son passed away.

Was that just yesterday? In 24 hours we went from hanging on to mourning to sitting in a room at a funeral home looking at a price list for cremating our son.

Since we announced the terrible news our phones haven't stopped buzzing. I think before the age of smartphones this would be an awfully lonely place to be, typing from a hotel room in downtown Orlando. Instead there's some heartwarming message or development every hour - literally - that makes us smile, cry or both.

Some things were well underway. My fundraising efforts for the Alberta Children's Hospital through gaming charity Extra Life began in 2013 when he was diagnosed. Earlier this week I decided to create the #dominicstrong team so we could better track combined donations from the local group (and so that Trish would know how close we were to US$20,000 for her to shave her head).

Our friends Kristine and Steve Russell started an online auction (Oct. 30-Nov. 1) to add to the Extra Life fundraising total - and have now changed that group name to simply #dominicstrong. They hope to add another US$10,000 and then shave their heads (along with their kids).

Another friend, Amber Dewar, set up a mini golf fundraiser - her family owns Hooplas, a new entertainment centre in Medicine Hat. That will happen Sept. 12.

Kara Brake stepped up wanting to do a public event for the actual 24-hour gaming marathon Nov. 7.

Now for the new stuff:

- Lorna Scott, who wrote a book about being a caregiver for her husband Callum, offered to help plan Dom's memorial service - currently set for Monday, Sept. 14, 2 p.m. or so in Medicine Hat. Details are still being finalized. We will let you all know.

- Krista Wilde (with Kristine's help) has set up a T-shirt fundraiser. For $25 you'll get a #dominicstrong shirt with a thumbs-up sign on the back, and $20 will go to our Extra Life efforts. If you're not in Medicine Hat make sure to select the special #dominicstrong shipping ($5).

- An online auction (Tara's Cozy Creations) brought in US$546 in a matter of hours.

- Another online auction (Westoria Creations) is now running, with all proceeds to be matched by Medicine Hat company Budget Blinds. Find it and bid by Sept. 6 at 12:59 p.m.

- Good friend Tamara Schroeder will chop a foot off her hair if she can raise $1,000.

- Tina Spector has a Scentsy fundraiser running until Oct. 31.

Give Kids the World brought our things to the new hotel room. We can't bear to go back there right now. And they made a special photo album looking back at our brief time there.

Then there was a balloon release in Medicine Hat, organized by Corrie Dale and Kara in a matter of hours. Dozens showed up. Just incredible. Even CHAT TV helped publicize it with a touching bit on their evening news.

Now there's a second balloon release planned by Trevor Prosser for Calgary. McMahon Stadium parking lot, Sept. 7 at 1:30 p.m., an hour before the Stampeders play the Eskimos in the Labour Day game.

Speaking of the Stampeders, they were among three major professional sports teams Dom interacted with; the Calgary Flames and Vancouver Canucks were the others. All three used their social media accounts to send public condolences.

We heard from friends and family, near and far, many who we hadn't been in touch with for years. Perhaps the most special of those interactions was from Leanne Pottinger, an old college classmate of mine:

"My husband and I lost our only son, Everett, in June after complications following heart surgery. We, too, spent many, many hours listening to alarms and watching monitors, sleeping in chairs and dark corners and hoping, wishing and praying for a miracle that never came.


Every parent who loses a child has a different journey, so I won’t pretend to understand for a minute what you both are going through. I can tell you, though, that I understand the shock, fear, paralyzing grief, anguish and sadness you may be feeling. It’s consuming, dark and lonely - something that only other parents who have lost precious children can begin to understand.


I just wanted to reach out and let you know you’re not alone. And that Dominic’s spirit shone through in your blog, and the love you two have for him is so apparent and so beautiful. I have to tell you - we have our grief counselling at Rotary Flames House…our second session after Everett died, the cutest little guy I’d seen in a long time rode by us in a wagon. The nurse paused beside us as we waited in the foyer and this little guy looked up at us and gave us a huge thumbs up. I don’t know if the timing is the same, but that sounds a lot like Dominic. I want you to know it was the first time I had smiled since we lost Everett. What an amazing gift from your son.


Take care of each other - be kind to yourselves. If there is anything I can ever do for either of you, you have my email - though I know you have many, many friends and family who love you both and Dominic so much. Again, I’m so sorry for your immense loss….I hope you can eventually find comfort in the joy he brought you in the time you had together - a lifetime too short."

We will get through today. Then tomorrow. On Sunday Dominic will be cremated and we could be on a plane as early as that night.
I'm already fearing wheeling his empty stroller through the airport and showing the urn to customs officials. But we will get through all of that too. All of the support sent our way will lift us up when we want to fall down.

We will be #dominicstrong. Now and always.
Posted by Sean Rooney at 18:34