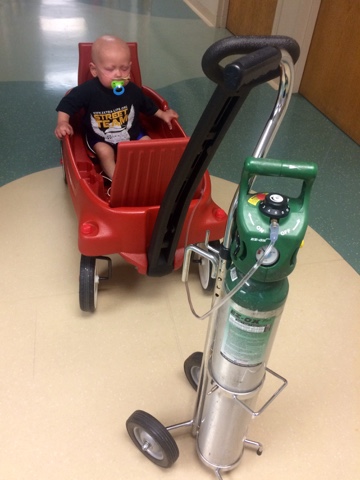 Dom made it through the night after we said goodbye. He slept in Trish's arms for a few hours, then moved to the crib.

His oxygen requirements remained at six litres - a number we couldn't have fathomed even a week ago. When we traveled to Vancouver in January he needed a half-litre. When it's life or death you adapt, just as he's done the past two years.

ICU doctors couldn't do more for him. Our goal? Make him comfortable, regardless of what happens. We know the end result, so we have a do not resuscitate order. If he ever stops breathing, that's it.

So it was off to the oncology ward here at Arnold Palmer Children's Hospital in Orlando.

Fewer lights, fewer people, fewer monitors. More privacy. Trish went to Give Kids the World Village to pack up our bags there - they then graciously agreed to deliver them to us when we needed.

Dom was grumpy, as you'd expect. But he perked up when a music therapist came to the room. I couldn't help but smile when he played Raffi's Down by the Bay. A little slice of Canadiana.

After the music session ended I tried offering him ginger ale, watching TV, dancing to music, anything. Finally I asked if he'd like to go for a ride. Bingo. We got him in a wagon and toured the hallways for an hour.

Then he started to crash again.

Trish was a 35-minute drive away.

He sat in that crib, mouth open, as I got nurses to bring morphine and ventolin. He started bending over at the waist, leaning forward in an effort to keep his overwhelmed lungs working.

"Keep fighting," I told him. "Just long enough for mom to get here and hold you."

Every few minutes, his chin practically on his knees, his left hand would shoot out. And his thumb would pop up.

Finally, a doctor suggested he'd have better luck laying in my arms. And sure enough he relaxed there, hanging on and improving.

You're so strong, everyone tells us. We heard it from the doctors and nurses here today, and hundreds of people online. But we're not strong. He is.

Keep fighting, they implore him, as though there were a battle here to be lost. As though if he dies he will be any less strong. No, we all fight alongside him. And we are all stronger for doing so.

Will he make it via air ambulance back to Calgary? It seems doubtful, but plans for it are in the works. It was doubtful he'd make it through January, and here we are in September.

But if he doesn't, it will not be anyone's fault, nor anyone's failure, much less his.

He's strong, and everyone who knows him is too. And we will do this together.
Posted by Sean Rooney at 21:37