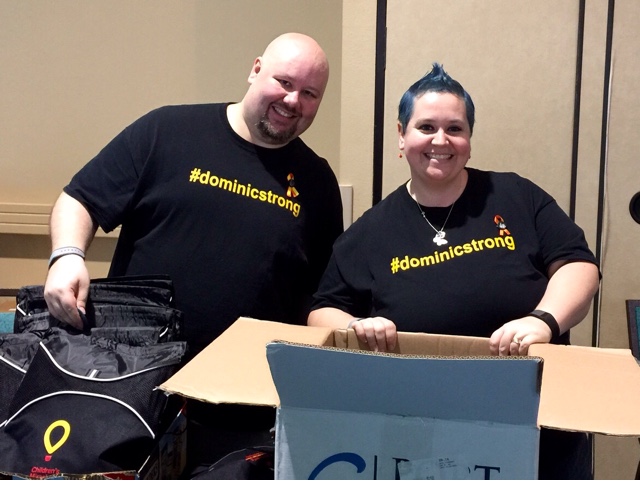 Extra Life is the reason we are here in Orlando.

Well, Dominic is, but it's Extra Life we've been most involved with for helping give back to the Alberta Children's Hospital.

With a 24-hour gaming marathon as its centrepiece, it was easy to be excited when I was told about it in 2013. When founder Jeromy Adams came to Calgary to help start a recruitment group in 2014, Dom was in the ICU and I dropped by the meeting.

We took a photo together. Prior to Monday night we hadn't seen each other since.

Inspired by Dominic's story, Jeromy and the folks at Children's Miracle Network approached Trish and I about sharing it.

The Extra Life team - including Jeromy, Liz, Rick and a host of other volunteers - has been hard at work the last two days setting up Extra Life's presence at the CMN Momentum conference. To say the entire thing is huge is an understatement: It takes about 10 minutes just to walk the length of the conference halls, and that's to say nothing for their depth.

In our area, where the Extra Life United gaming competition will take place through Thursday night, there are dozens of TV monitors, XBox consoles, tables and chairs and couches. Three gigantic screens. It's a whirlwind of activity, and we were sure to help out. 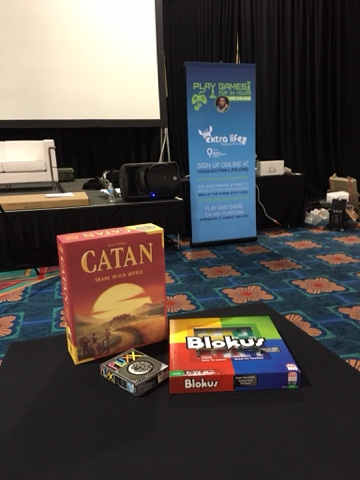 I unboxed headphones, mice and keyboards, while Trish put together swag bags for the contestants.

And then Jeromy asks: 'Hey, does Trish want to play in the tournament?'

Turns out they had 15 people signed up to play tabletop games. Sixteen makes a nice four sets of four players per table.

Here she thought she'd sleep in during the mornings I started playing. Not anymore. And now our chances of winning some money for the hospital have theoretically doubled.

If you want to drop by and see what's happening, go to www.twitch.tv/extralife4kids Wednesday and Thursday, 9 a.m.-5 p.m. ET as there is a special Twitch crew broadcasting the whole thing. More than 120 gamers will be competing for US$150,000 in prizes for their respective hospitals. I also plan to try and use Periscope (@seanrooney) to live-broadcast some things daily. And I'll keep blogging of course.

The biggest highlight of the day had nothing to do with money or games or even us. Every North American children's hospital nominates a champion child to represent them for the year, and Momentum is arguably the biggest trip they do. All of the Canadian kids met in Toronto the last couple days, and today they arrived en masse to Orlando.

A huge group of conference attendees stopped what they were doing and lined up as the kids got off the bus. We all cheered them as they walked in. I saw more than one parent wipe tears from their eyes, and had to do the same.

Kids like these are the heroes of our stories. They're who we give back for.

As much as this week is about Dominic for us, it's also about them.