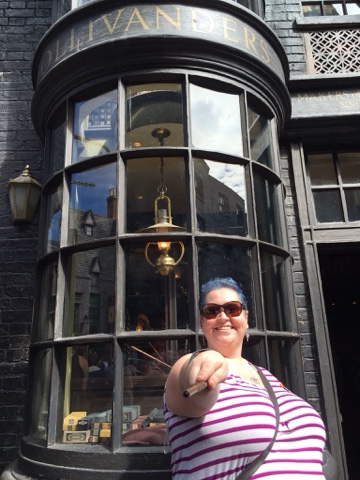 Day 1 of Dominic's wish trip was traveling to Orlando.

Day 2 was spent at Arnold Palmer Children's Hospital getting a platelet transfusion.

And Day 4 was when he crashed.

On Sunday, we got to try Day 4 again. Without him.

It started well. I called Give Kids the World last week and they came through with free tickets to Universal Studios, which is where we were going to take Dom that fateful morning. The only downside was we had to use them Sunday, the morning after it took us 14 hours to travel from Calgary to Coronado Springs Resort at Disney World.

Walking to the park gate was tough. He should've been here for this. But the feeling subsided and excitement took over. I practically skipped over to the Simpsons area, shouting out with glee as I looked for - and found - items in the gift shop with the name Bort on them. If you don't get the reference, trust me, it's fantastic. 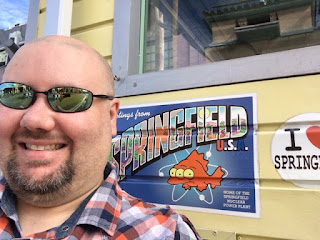 We got on rides meant for kids, took what seemed to be lots of photos, but looking at them now I can't help but think we'd have taken so many more if he was there. Trish pointed out during the day how much he would've loved all the things to see and do. Sure, he didn't know most of the characters, but it was the interaction, be it a silly mirror or all the people everywhere, that he'd enjoy.

I'm not a beer guy, so I wasn't about to shell out for Duff energy drink just to say I drank Duff. But you'd better believe we drank Butterbeer once we arrived at the Harry Potter area of Universal Studios. It's more like a butterscotch soda, with a neat topping of sweet custard-like cream to approximate the head of a real brew. 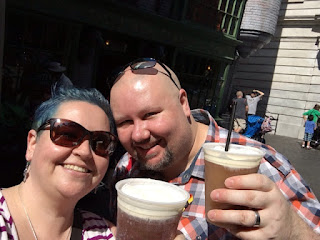 The Potter area was magnificent. Trish got a wand from Ollivander's and ran around like a 12-year-old schoolgirl from one place in Diagon Alley to the next, as the wands are interactive with many of the exhibits. We rode on the Hogwarts Express, roller coasters, had a grand old time.

And then we crashed.

It was probably a combination of lack of sleep, the 15,000 steps her Fitbit told her we'd accomplished and not eating until 2:30 p.m. - we were so busy going from ride to ride. Exhaustion set in, and with it came sadness, at least for me.

I watched as a father walked out of the park with his son, probably six or seven years old, blowing soap bubbles out of a toy gun. They revelled in their exhaustion: I sank into mine.

"Sean?" I looked around but saw nothing.

I heard it a third time, but had already given up. No way was it for me.

Turns out it was Jeromy Adams, founder of Extra Life, there with his family for the day. He didn't come up to me at the time but we met later in the evening for dinner. Jeromy is essentially why we are here this week; he followed Dominic's story and saw what happened with #Dominicstrong, and asked if we'd be OK to share our journey to inspire others in the gaming community as well.

We spent the evening connecting with him and other new friends who we'd only ever known online before. A nurse who did his 24-hour marathon in a children's hospital. An IT professional who came to Extra Life United last year and is back this year to help make it even better. And the amazing staff behind this week's events.

The day started as a chance to go back. But it ends with a chance to move forward.
Posted by Sean Rooney at 00:23