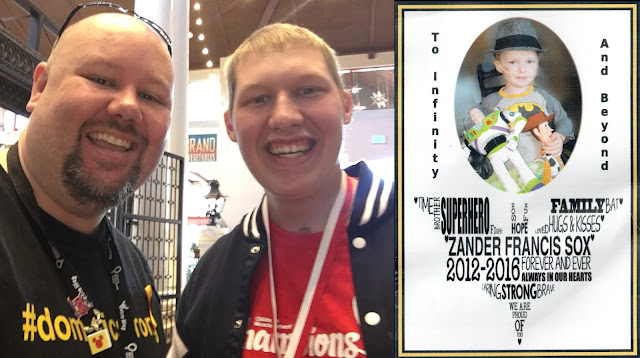 We only met once or twice. Our time together is measured in minutes, not days, months, or years. But we'll never forget them.

Kids with cancer tend to do that to you.

Zander wasn't even awake when we came to see him and his parents. His brain cancer and the chemotherapy needed to treat it left him wheelchair-bound, and they were staying at a house in Calgary, a four-hour drive from their home in Saskatchewan. He was laying on the couch, zonked out.

We offered what help we could, and continue to be in touch with them to this day. Whenever I saw a picture of Zander with the animal stickers we'd recommended keeping his feeding tube in place, I smiled. He was such a strong kid... maybe I was projecting a bit of Dom onto him too.

Like us they had a long road. The discovery of the tumours despite numerous doctors disagreeing there was anything wrong; the treatment, even the hope after initial remission that somehow persevered after the cancer returned.

Four-year-old Zander, like our two-year-old Dominic, was wise beyond his years.

One night this summer he lingered, looking out at the stars. "I'll be one of those stars someday," he told his mom.

Not bad for a kid who idolized Buzz Lightyear from the movie Toy Story.

We only know that story because it was shared at his eulogy Dec. 10 in Medicine Hat. On the program for the service was Zander and the headline, "To Infinity and Beyond." He's a superhero in our hearts.

Derek, we met when we went to Orlando in February for Extra Life United at the Children's Miracle Network conference. We'd made sure to research all we could about the champion kids coming from Canada, and Derek was the 16-year-old brain cancer survivor from Edmonton's Stollery Children's Hospital.

He even liked video games, so this was destined to go well. As it turned out, he knew many of the celebrities Extra Life had brought in for the tournament. One night we were hanging out with Derek and his family when some of the guys from the gaming group Mindcrack showed up. He thought they were the stars, but the truth was he outshone them all. The smile he had on his face when I took their group photo was priceless. 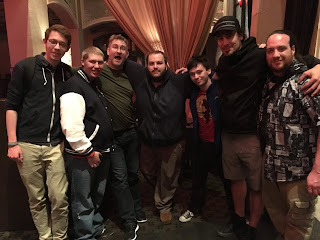 When it came time for the Extra Life group to share in some game time with the champion kids, the presumption was we'd take it easy and play safe so they'd win. With Derek, that wasn't necessary. He was so good he probably would've won money for his hospital if he'd had the time to participate.

Derek also had wisdom most could only dream of. "If you can make a small difference in someone's life, that's what life is all about," he said. "When you do something nice, people remember it, so you should remember to stay kind."

His dad shared those words on Facebook today. Derek's funeral is Wednesday.

Derek and Zander died within hours of each other Dec. 4.

I'd love to share some greater truth or lesson from all of this, but the fact is all I feel is pain. That'll evolve into something else, but for now, I think of the road ahead for those families. Among the hardest parts of losing a child in this way is that after the eulogies, the donations in kind, the extra hugs and meals from friends is that eventually, it ends and you're left with a broken heart. At this time of year when everyone celebrates being together, knowing someone you love is gone is simply horrifying.

Yes, you can refocus and pour your heart into what you still have. And I am thankful we know Zander and Derek and all the other kids we've met because of Dominic's journey.

But I'd be much happier if I didn't know any of them, or cancer.
Posted by Sean Rooney at 22:55