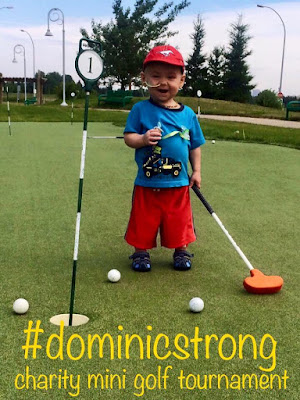 When your kid is in a hospital things can happen real slow, or real quick.

The slow times can feel like forever. Hours sitting in a room, sometimes on isolation where you can't even roam the hallways. Weeks, even months waiting for something to change. Endless procedures and tests.

Then something happens and you're literally running to the ICU, or speeding back to the hospital (not that we'd advocate doing either, of course).

This summer is flying by for us, now just a week until the #Dominicstrong Mini-Golf Tournament at Hooplas. But for another family we've become friends with, it's taken forever.

Landon Miller was diagnosed with a rare form of cardiomyopathy last July. Basically, he needed a new heart. 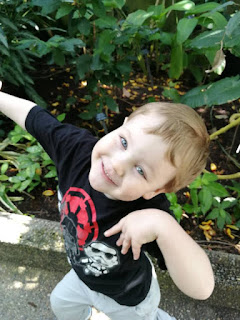 One day, his parents Dave and Julie were helping raise money for the Alberta Children's Hospital through Extra Life, the same charity we've used since Dominic's leukemia diagnosis. Suddenly, they were at the hospital, told they'd be staying there for a long time.

Dave had to do what I did, driving back and forth from home (his is in Cranbrook, B.C.) to Calgary on a nearly-weekly basis in order to keep working and still see his wife and child. Those drives can be tough, especially in the winter through a mountain pass, but add to that the stress of your kid's medical situation and it's a whole other level.

Julie had to move to another city, basically told a transplant could happen any moment, but that the usual wait list means it could take more than a year.

They never stopped giving back, even when they were the ones in need. If anything they're probably more motivated than ever now. They were the reason we attended Cranbrook's big game day last year.

I wouldn't be writing this unless we had some news to pass along. It's the best news.

After a year of waiting, last week three-year-old Landon was told he'd be getting a new heart. Of course, that means another child had a heart to give, so the news is both incredible and devastating.

For as long as the wait was, once the transplant was happening, it was less than a day before he was in surgery. As of the writing of this blog he's progressing better than anyone expected, able to stand up and quickly ridding himself of any medication. He's a champion.

Their road is far from over. The surgery happened at the Stollery in Edmonton, which specializes in cardiology. They'll go back to Calgary soon, but won't be able to return all the way home for at least six months. As Dave notes, you don't want to make that treacherous drive in the middle of winter with a medically sensitive kid.

"It's been a long road, but it's nice to be able to see the end, even if it's off in the distance," he wrote to me.

We do this charity work so that kids can have the best care when they need it. Sure, Landon isn't from Medicine Hat, but Dominic wasn't from Calgary and that's the hospital we support. There are tons of other kids in smaller cities like ours that have to basically split up their families in order to go to the place they've got the best care.

The mini-golf tournament is a week away and we are nervous. Even though we had a great time last year and it seemed to be well-received, only two teams are signed up as of the writing of this blog. Please, we'd like this to be a success and an event that continues in future years. It's a ton of fun, you play 18 holes of mini-golf, there will be prizes, special fun holes and lots more.

We've confirmed that Skinny's Smokehouse BBQ will supply dinner for all of our golfers at no charge! Absolutely incredible. And Schwab and Co. Chartered Accountants are sponsoring the event so that your registration fee will go entirely to the hospital.

It costs $18 per person to register, or you can enter a team of four for $70. Please go to hooplas.ca to register.

We'd love to see two teams on each hole, honestly. The evening starts at 5 p.m. Aug. 12 at Hooplas. Hope to see you there.