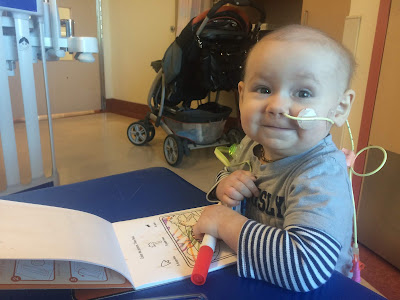 Last week I took a walk out past his bench and whispered to him. It was cool outside, quiet, nobody and seemingly nothing around on a starlit night after work.

It's a one-sided conversation, of course. Three years ago today I cried at his bedside as he drew his last breath.

I can remember every bit of that moment and it kills me. How I looked at the clock to remember the time. How Trish didn't want to let his hand go because she was all that was keeping it warm. The room at the Arnold Palmer Children's Hospital in Orlando, with its tiny shower.

I vowed to raise him the only way I had left - by doing good things in his name. To keep his memory alive.

We are so thankful for the teams and volunteers who came out to the #Dominicstrong mini-golf tournament last month. It raised $950, which equated to US$700 once we put the money through Trish's Extra Life page. They still don't accept Canadian dollars, which remains promised.

We ran an impromptu contest this weekend because The Esplanade had donated a pair of tickets to a show Sept. 25 - which takes place before our Sept. 28-30 online auction. We chose to raffle them off, giving ballots for each $5 donated to Trish's Extra Life page. As of the writing of this blog, my sister (who doesn't even live in Medicine Hat) donated $50, a friend donated $10, and that's it.

There's been good response for donations for the upcoming auction, but I'm scared that nobody will bid on any of it. I'm aware that's ridiculous. I do worry that Facebook's algorithms are working against us though. Few people react to our posts on the #Dominicstrong page, so will enough people even see or know about the auction when it happens?

I've been depressed all week at work leading up to today. I miss him so much. Today I have to work and I'll do my best to do my job. But it hurts every time I think about how he's not here. Trish will stay home with Samantha, and we'll put out balloons again that hopefully two idiot kids won't ruin (like what happened on his birthday last year).

And then moments happen like the other night when I whispered to my son.

No sooner had I asked how he was doing than a bird, unseen in the night sky, chirped in reply.

And I kept walking.

What else can you do? You've got to keep walking.
Posted by Sean Rooney at 00:37