Normally by this time of year we've already had the Superhero Night game, already started asking for donations for the online auction, already got plans in the works for the 25-hour charity game day.

So we're a bit late. But late is better than never, right?

Truth is, life is pretty good for us. We're enjoying the summer, have great friends, happy at our jobs, and love our little family. Of course we wonder what it would be like with Dominic, but dwelling on that would be counterproductive.

So on to more good news! Let's start with the Medicine Hat Mavericks. 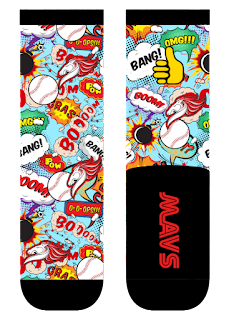 Before the pandemic started we had plans on doing a Superhero Night jersey with a Spider-Man theme for the game in 2020. Needless to say those got scrapped, and two years later the way the team does special nights has changed a bit too.

Gone are the jerseys, which were pretty expensive and also tough to get shipped from overseas in time during the current global economic climate. Instead, the team is doing special socks - far more affordable, easier to get in bulk but still a fun memento from the night.

The rest of the fun will be the same. Special music, games, and good times at the ballpark. Superhero Night is set for Thursday, Aug. 4 at Athletic Park, with a 7:05 p.m. first pitch. It's going to be a great night.

The online auction will take place Sept. 30-Oct. 2 this year, as always managed through our Facebook group (#Dominicstrong). If you know someone who might be interested in bidding, add them to the group please! We will start asking for donations in August.

If you run a business or know someone at a business who might want to donate an item, please contact us! This auction routinely gets 100-plus items, and our rule has always been if you donated last year, we're going to ask again this year.

Based on how late we are starting things I do expect a much smaller auction this year, and that's just fine. Every penny helps.

Well it's official: We are doing a public 25-hour game day again for the first time in four years.

The Medicine Hat Lodge is hosting us in one of their big upstairs ballrooms, just like our first year. It'll kick off at 8 a.m. Nov. 5 and we'll play games and try to raise money for the Alberta Children's Hospital until 8 a.m. on Nov. 6.

Want to join us for the full 25 hours? You'll want to get in touch with us so that we can plan out some dedicated space for you, and make sure you've got a fundraising page set up through Extra Life. Only want to drop in for a few hours? That will work too! There will be plenty of games for all to play, and likely a few special silent auction items which we're going to hold over from the main online auction.

If anyone wants to help plan this event definitely let us know.

In case you're not following along on our Facebook group, at the end of the previous blog post in April I mentioned that I was going to compete in Extra Life United. It wound up that I won the Carcassone tournament, worth US$4,000 to the hospital! It was truly a marathon and I've asked them politely to do it differently next time - the board game tournaments were definitely about attrition, rather than skill, which made them much different than the video game side of the event.

Unfortunately, the dates for Extra Life United 2023 are right at the busiest part of tax season for Trish, so we don't know when we'll be seeing our friends in that community next.

Well that's it for this post. Look for a recap of Superhero Night next week, and regular updates leading up to both the online auction and game day. This is the 10th year anniversary of Dominic's cancer diagnosis, so it's both special and especially tough. Thank you for keeping Dominic in your heart.