After three long years, it was great to get back to Athletic Park for Superhero Night with the Medicine Hat Mavericks.

It was far more important than we realized.

Reminders of why we do what we do, and just how much support Dominic still has in our community were abundant Thursday night in Medicine Hat. From the first pitch to an extra 10 cents from a little girl, we saw loud and clear why we need to keep helping more kids in need.

Three days before the game, we didn't even have a person picked to throw out the first pitch. We'd found a kid undergoing cancer treatment who would have been great, but alas, they had chemotherapy treatment that day. So we put out the call and immediately heard back from some familiar faces - notably Kallum, a cancer survivor who was diagnosed around the same time as Dominic.

Kallum, as his mom notes, has always been a kind soul. I think going through what these kids do makes them more thoughtful and empathetic. And now with his sister Abbi spending time in the Alberta Children's Hospital with complex regional pain syndrome, he was throwing for her, too. Families like theirs are battle-tested, to be sure, but we feel terrible they're having to cope with something so difficult again.

The Mavericks threw a few curveballs our way for the game. An hour before Kallum's pitch, we were informed that Katelyn - Miss Teen Personality Western Canada 2022 - was also going to throw a first pitch. First reaction? Not pleased. Then we met her.

Turns out Katelyn does work for the Alberta Children's as well, as she goes there regularly for her own medical issues. So really, she's a perfect ambassador and perhaps fated to have met us at some point.

Three years ago, the plan was to continue the tradition of having a special jersey for players to wear during the game, and sell them to fans with the proceeds to charity. But times changed, and the team decided to go with special socks instead. Well, once we got the word out to #Dominicstrong, there was no stopping the support. For those who couldn't make it, I offered to buy socks for them. I wound up with 39 pairs of socks!

We're not yet sure how much the team raised for us yet, but there was one other pair of socks which were important, and they went to a player from the opposing team. Weyburn's Cooper Walbaum just finished his own chemotherapy, another superhero like Kallum and Dominic in his own right. One thing he did to help cope with his cancer treatment was have dozens and dozens of pairs of - would you know - special socks.

Our team manned the tables, Under the Stars came with a horde of superhero characters who roamed the stands, and the players looked great with their knee-high socks - which I believe you can still purchase if you want.

Another small moment we'll remember happened near the end of the game. Two girls and their dad came up to the table to make a donation. After dad put in a bill, one of the little girls fished through her purse and found what she could - a dime. As they say, every penny counts.

We're going full throttle now with the online auction Sept. 30-Oct. 2, and the 25-hour game day at Medicine Hat Lodge Nov. 5-6. Thanks to everyone who made Superhero Night a success. 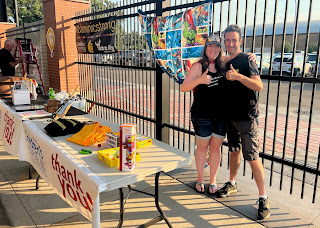 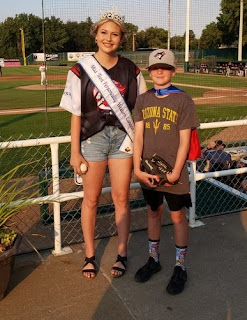