An auction, a store, then another auction 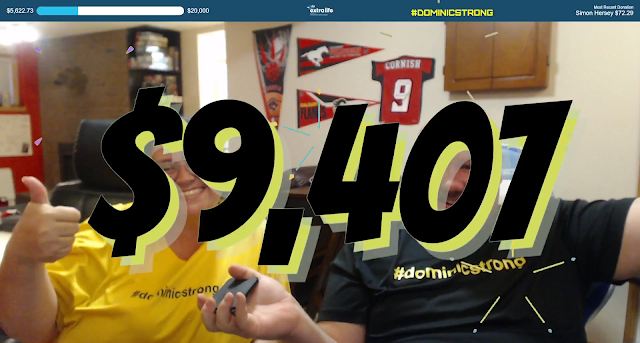 But that's far from the end of this year's fundraising story. Actually, I kind of want to get past it as soon as possible.

That's not to say the auction wasn't amazing. It was! In 48 hours we sold 115 items to dozens of people. They all paid before 10 a.m. the next morning and all but a few things were out the door a day later. It was the most efficient and least stressful auction we've ever run.

Some folks donated extra when they paid, bumping the totals. And we actually kept 13 donated items out of the online auction because we're doing a separate, in-person auction during our Nov. 5 Extra Life game day marathon at Medicine Hat Lodge.

And even that isn't the point I want to get to.

No, there was one... more... thing we worked on to announce at the end of this year's auction. It won't make nearly as much money as the auction, but it's been a long time coming.

For the first time in four years, we are selling #Dominicstrong items! Many friends have asked when we'd do this again, and our daughter has outgrown most of the apparel we bought for her when she was born, plus I've learned a lot in my brief new communications career including how to run these things. 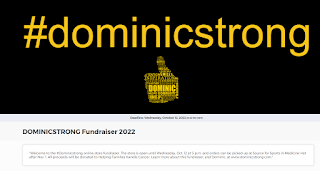 As we've done before, proceeds from this sale will go to Helping Families Handle Cancer, the Calgary-based charity that does exactly what it says. When Dominic was in hospital they helped with parking passes, gas cards, and all kinds of non-monetary support. Carie, who started the organization, is a cancer survivor herself and puts everything she has into it.

Anyhow, there are toques, T-shirts, a tank top, and hoodies for sale now at https://dominicstrong2022.itemorder.com/.

There is a catch: Orders will be delivered to Source for Sports here in Medicine Hat, so if you don't live here, you'll need to be in touch with us to arrange delivery. Message us before placing your order unless you're going to pick it up yourself.

There is another catch: This is a limited-time store. It closes at 5 p.m. Oct. 12, which just so happens to be Dominic's birthday. He would be turning 10. So you need to place your order soon, or not at all. There is no extra stock being purchased.

Thanks to everyone who contributed to the auction. Watch for more details about the 25-hour game day here soon. But don't waste time if you want any apparel! Who knows when we'll do this again.